If one feels restless about the threat of global conflict today, they will find those anxieties reflected on the stage in Coming Up for Air, adapted from George Orwell’s pre-war novel and directed by Leslie Mildiner, playing at Kay Meek Centre Nov. 16-25.

“The idea really came to me the day I got my new false teeth,” said George Bowling, played by Bernard Cuffling. And so began Coming Up for Air on its opening night, Thursday, Nov. 16, demonstrating the wry and understated humour that pervaded the play even as it explored the topics of aging and war.

The play follows George Bowling as he decides to return to his childhood home as an adult. Cuffling stars as George in the one-man play, and kept the audience engaged by moving about the stage and including multiple imitations of other characters.

The play began light-hearted, with George cynically describing his hum-drum life and unhappy marriage. Then he began to reminisce about his hometown, Lower Binfield. He was sporadically interrupted by the sounds of bomber planes flying above, indicating the approach of war.

Cuffling demonstrated an uncanny ability to imitate children, as he reimagined being a boy and following his brother to go fishing. He sat on the edge of the stage, swinging his feet and holding an imaginary fishing rod, and seemed to embody the nostalgia of a memory.

Even younger members of the audience could relate to his musings on missed opportunities. He recalled an excuse he made not to return to a secluded, natural pool he meant to fish in as a boy. But he admitted, “if it hadn’t been that, it would have been something else.”

When George returns to Lower Binfield, he finds it utterly changed. As he explores the town, themes about pollution, commercialization and generational change emerge.

The whole play embodied the surreal experiences that show how quickly life can change when one isn’t looking. The feeling of going to a pub where he used to be a regular and nobody recognizes him, the feeling of seeing an old lover, and the lingering feeling these things are still “his.”

The novel was published just before the outbreak of WWII, demonstrating 1939 Britain’s pre-war anxiety. In the play’s program, Mildiner explains how these themes relate to contemporary issues.

Referencing chaos ensuing from Donald Trump’s presidency, the director describes how “80 years from the publication of Orwell’s satirical black comedy-of-errors, like the main character of George Bowling, most of us feel powerless against the said chaos and are intent on simply keeping our heads down and just getting on with it.”

Indeed, some of George’s statements seemed remarkably relevant today. He talked about “the people who rule your destiny, but you never see them,” and the false confidence “war only happens in foreign countries.” He constantly re-imagines WWI, and pictures war breaking out around him as he walks down the street.

As the novel was published in 1939, some of the play’s humour may fall a bit flat – but these jokes may also be forgiven since they reflect the time it was written.

Another minor distraction is Cuffling’s age. In most cases, changing a character’s race, gender or age does not hinder the story. But since Coming Up for Air relies so much on chronology, his age could cause some confusion. George describes being a boy in 1900, being a teenager in the 1910s, serving in WWI, and being a father to two small children in 1939. This would make George 50-years-old at the most (he is 45-years-old in the novel). Since Cuffling is about 70-years-old, it may make this sequence unclear (George also constantly calls himself fat and Cuffling is not, but that merely contributes to the humour).

George’s return to Lower Binfield had some dark, funny moments, but one genuinely felt George’s disappointment, even if the audience probably suspected what would happen. The loss of his home demonstrated the futility of trying to go backwards. Cuffing was especially moving when describing the title, the desire to come up for air, in a poignant moment that will resonate with viewers. Cuffling fluidly transitioned between child-like joy, fear of the bombers and adult cynicism. The play has few breaks in the monologue, so Cuffling’s energetic delivery is notably impressive.

Most of the audience likely went home thinking of the life choices they had made and what their futures held, on a personal and global level. Like much of Orwell’s work, Coming Up for Air feels remarkably modern politically. The play criticizes those in power and explores what it means for everyday folk with no influence on the global stage, who are merely trying to make do while they wait for “the bad things to come.” 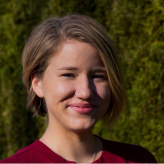