Standing in violet light, flanked only by a violin and a bass guitar, Lucy Rose sings. And the audience at Vancouver’s Venue nightclub listens. Truly listens, in silent rapture.

But there is energy in that quietness. There is energy in Rose’s emotional lilting melodies that, for much of their sadness, are uplifting. It’s a soft energy that has her rocking gently from foot to foot. She really means every word she sings.

Rose means what she says too. Between songs, she told stories that she attempted to compress and then admitted, laughing, that they were not at all compressed. She won the crowd over within 30 seconds of talking.

It was partly the softly-spoken British accent. But it’s mostly the easy banter she had with her audience, a self-deprecating sense of humour and frankness.

After opening with a couple of newer songs, her third song was “Middle of the Bed,” from her first album Like I Used To. She dedicated this to her older fans, and the crowd was appreciative. Rose has come so far from her first album. It’s not that her style has changed, but there is an element of grit that has developed in the feel of her songs. There is something more to her lyrics.

This acquired grittiness really came across in the fifth song of her set, “Moirai,” which was off her latest album Something’s Changing. Rose said it was named for Moirai, the Greek god of fate. Rose said she doesn’t see how fate can exist. “I think he’s a dick,” she laughed. The crowd did too (although Moirai actually describes several female fates in Greek mythology, her point still stands).

Rose admitted that after the release of her second studio album Work It Out, she almost decided to pack in touring and just keep her music to the local pub. She was supposed to come to Vancouver, but couldn’t afford to in the end.

She ended up making plans to travel with her husband around Latin America but after receiving the odd tweet requesting she play there, she decided to bring her guitar along. She basically said, “if you let me live with you and find me somewhere to play, I’ll play.”

It ended up being somewhat of a life changing tour. She discovered from her fans out there that “music had been that thing that helped them get through. If it did mean something to someone, it’s worth carrying on.”

About three quarters of the way through her set, Rose addressed the people in the crowd who came to the show with someone else. The crowd appreciated this, cheering her on.

“I think it’s probably 40 to 50 per cent of people,” she joked. “It’s got to the point in the show where you’re having a good time but you’re wondering how many songs are left.”

Rose finished with an encore consisting of “Night Bus” and “Like an Arrow.” “Like an Arrow”, from her second album, is a wonderful song about taking a chance and falling in love. However, perhaps Rose believed it wasn’t a good choice. Towards the end, she messed up on one of the high notes and stopped playing. “Fuck,” she said. “I can’t end on a bad note.” She got some shouts of support from the crowd.

“This actually used to happen in one out of three gigs, which is why we don’t really do it anymore,” she admitted.

But the crowd didn’t care. It’s still a great tune. She already charmed her audience and she finished to great applause. 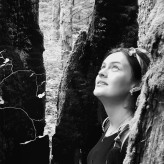