Slayer with Lamb of God, Anthrax, Behemoth and Testament at Pacific Coliseum, 5/16/18

Slayer were back in Vancouver, but this time it was different. It was Slayer’s Final World Tour. The mood outside the Pacific Coliseum was quite upbeat on this sunny day of May.

The first leg of the Slayer Final World Tour has an all-star lineup with Lamb of God, Anthrax, Behemoth and Testament. It seemed like Slayer wanted to make sure to leave with a “Bang!”

By the time Bay Area veterans and concert openers Testament were half way their set, the Coliseum was already hosting a large crowd. Combined with the fact that they had full stage and full sound, this was perfect to get the fans going right off the bat into thrash metal concert mode.

A massive backdrop reveals the name BEHEMOTH as huge as the band’s spirit. The four Polish demons take on the stage led by the charismatic Nergal, who only stopped doing backstage Instagram posts and live casts during their performance. Building their set from crushing (Ov Fire and the Void), to faster (Demigod), until chaos was released for Ora Pro Nobis Lucifer. Their music’s satanic spirit wrapped the thousands of fans making it then clear why Behemoth was an excellent choice of band to be a part of Slayer’s final tour.

Next up came Anthrax, who are supporting their “Big 4” fellows in Slayer in the two North American legs of the World Tour as well as in the European one. Having just released their long-awaited live-in-concert DVD “Kings Among Scotland” on April 27, the band seems to possess all, if not more, of the energy that have characterised them through the decades. A fun and high energy set full of classics, such as Caught in a Mosh, Madhouse, Antisocial, Indians, NFL, etc, delivered relentlessly, left new and old thrash metal fans completely satisfied.

Lamb of God are joining Slayer and Anthrax on the announced legs of the World Tour, as well as having supported the previous Slayer 2017 tour, which skipped Vancouver. Their stage design was bang on to bring the focus to the band, and for fans to appreciate what was arguably the best stage presence of the concert. The set itself was carefully curated with songs from different times, and included a cover of the song “Inherit The Earth” by The Accüsed, which was recorded for the covers album Legion: XX, out May 18th under the band’s previous name Burn The Priest.

Impressive stage pyrotechnics lit iron wrought Slayer pentagram logos, and the fire made the stage look like a true representation of hell. A hell where all Slayer fans want to be as the band unleashes the fury of “Repentless,” off their most recent album.

Followed by heavy hitters “Blood Red,” “Disciple” and “Mandatory Suicide,” Slayer seemed to be making the statement of pride on their legacy. The original members Tom Araya and Kerry King seemed to be 100% in their element, and the whole band sounded as cohesive as ever.

At the scream of ‘WAR!’ Slayer fans become one army ready to give out blood for their idols, who lead them to the battle at the beat of “War Ensemble.” Gary Holt had a strong stage presence during the Hanneman solos, honouring the fallen band member.

The classic “Seasons In The Abyss” took Paul Bostaph’s drumming to the spotlight. Heavy amounts of reverb helped give “Dead Skin Mask” that scary atmosphere it is always associated to and with some refreshing twists towards the ending.

All pyrotechnics were set to the maximum for “Hell Awaits,” an experience for all senses. They continued with all classics until the end: “South of Heaven,” “Raining Blood,” “Chemical Warfare,” and “Angel of Death” … one after another.

Before leaving the stage Tom Araya proceeded to say some words. Fans might have expected a good-bye, but what was heard instead was an honest and sincere ‘thank you,’ from the band to the fans.

As the satisfied crowd retired peacefully, fans looked around and could feel the intense energy that was collectively created, deposited and left lingering within the walls of the Coliseum. 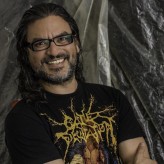