“Remember that time we huffed glue?”

This baffling quip is one of the running jokes in The After After Party, and is, amazingly, an accurate representation of the kind of humour and stories this play is built on. The main premise of The After After Party is that teenagers Jules and Fiona have absolutely no idea where their night went, and so they embark on a hilarious and often incomprehensibly weird journey to retrace their steps and discover how they ended up drunk and lost in a Vancouver park late at night.

Written and performed by Katey Hoffman and Cheyenne Mabberly, directed by Kayvon Khoshkam, the play goes far beyond the typical teenage friendship tale and frequently reaches for jokes that are as shocking as they are funny.

Much of the theatre in Vancouver is serious, moving, and political. It seeks to make a profound impact on its audience, or tell a beautiful, timeless story. The After After Party wants none of that, and there is not a single moment when the actors pretend that this play is anything other than hugely fun and entertaining. The play’s main draw comes from how self-deprecating and shameless the script and the actors are. Yes, one could say the story is about female friendship, or finally abandoning the search for high school popularity in favour of “being yourself”—but that would be a stretch.  The After After Party just wants to make you laugh and remember fondly the time when you were as ridiculous and dramatic as these teenagers. Jules and Fiona, the only two characters in the play, keep your attention by being spontaneous, boisterous, and often downright obscene.

The play thrives on a minimalistic set. There are small touches that make Jules and Fiona even more delightful to watch: bizarre props like a small vile of “love potion” that Jules orders off the internet, and an elaborate fold-down master plan on how to make an impression at the party. Dramatic lighting amps up the comedy even more when Jules or Fiona share a particularly intense moment. Perhaps one of the best touches is the early 2000’s party playlist that becomes the soundtrack to Jules’ and Fiona’s adventures—in particular, Wheatus’ “Teenage Dirtbag”, which is the theme song for Jules’ and Fiona’s ridiculous antics.

Despite Jules’ and Fiona’s obvious charm, it might seem difficult to watch two teenage girls sit on a park bench and piece together their wild night for seventy-two minutes. However, the playwrights employ a great technique to allow these characters to travel back in time through their night to figure out what really happened. Jules and Fiona uncover the blank spots in their memories from the pre-party, to the party, to the after party, to the after after party (and everything in between) using Ritalin to “jog their memories”. The technique keeps the play interesting and engaging as we watch Jules and Fiona stumble through a series of absurd scenarios (including but not limited to: making out with homeless men, setting a house on fire, and a terrifying feverish drug sequence involving a human-sized bunny with a gun).

Refreshingly lighthearted and funny, The After After Party is a wonderful reprieve for people who are tired of taking themselves—and life in general—far too seriously. 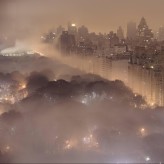