A La Music, Live Music Reviews
May 22, 2019 by Philip Finkelstein

The Rickshaw’s iconic sign illuminated the warm spring night on East Hastings, beckoning in Vancouver’s older rock scene and dedicated fans of The Lemonheads with a timeworn glow reading “Ric-haw.” The sign might have been missing a couple lights, but the Lemonheads put on a show that was totally lit.

Lead singer and guitarist, Evan Dando, and the band took the stage after 10 p.m., blasting right off. The throwback to 90s alternative rock elated the more mature crowd as dancing and cheering pursued throughout the evening. Beers went down easy to the punk performance, which included everything from head-banging metal to acoustic solos.

Things even got a little crazy when out of nowhere and with no explanation, Dando chugged a full-size container of peach yogurt onstage mid-song. With yogurt still dripping from his chin as he continued to rock, the baffled audience cheered even louder.

The Lemonheads definitely brought some authentic late-80s college vibes. Originally founded in 1986 and gaining popularity after the 1992 release of their major label album, It’s a Shame About Ray, the band has been putting out an assorted mix of rock beats ever since.

Named after the candy for its sour exterior and internal sweetness, The Lemonheads have taken a long journey over the years, with a constantly-changing cast of band members and styles. But Dando – the only constant of the operation – and his new ensemble have managed to keep the cult-like support alive, having just released their latest album, Varshons 2, in February.

Despite slightly muffled audio, the support was palpable in the Rickshaw on Saturday night, as those on the dancefloor swayed enjoyably to an ever-smiling band all too happy to play their hit tracks. Songs “Into Your Arms” and “It’s a Shame About Ray” really got the crowd swaying before Dando took the stage on his own for a stint of solo drum, acoustic and electric guitar jams. The band then rejoined him on stage for a final few songs and a killer encore, which ended with an eruption of nostalgic applause from the audience.

The cheery fans spilled onto the streets after the show seemingly having experienced the sugar rush that is the Lemonhead’s signature sour-then-sweet musical flavour. 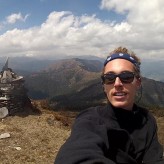