French electro-pop songwriter Loig Morin reached musical breakthrough with the release of his new album La rivière. The North Vancouver resident has impacted the Montreal music scene with an honest album that relies on timing, friendship, and maturity as a producer.

Morin arrived in Vancouver nine years ago. From the regions of Britany and Auvergne-Rhône-Alpes he brought a love for indie music and the experience of having recorded three albums. In Vancouver, he gained exposure to multiculturalism and a place to open his studio, Loig´s Music Lab.

“When you come to Canada it’s like a new birth. I am not in [it for the] stuff. If I can see in the eyes of people their love… If I can feel the love, that is enough for me,” said Morin.

In 2012, Morin released Lonsdale, an album that for the most part passed quietly, but helped him define his direction as a musician. It was in 2016, after the death of his friend and former producer, the French singer Ubier Mouniér, that Morin started writing for La rivière. The sudden awareness of our impermanence acted as a creative trigger.

La rivière is a beautiful album made of personal elements that came through meaningful personal connections. It reflects Morin´s history and friends from the past, people he worked with and a voice softly trained for it.

His most significant songs are “La rivière,” “Pre de l´arbre” and “Le Temps Qui Passe.” “La rivière” is about a loved one who fell into depression, and the struggle that came with it. “Pre de l´arbre” is a love story about time passing by and nostalgia.

“Death is in our way, so we must remember life is good,” said Morin. “Le Temps Qui Passe” talks about the love for his wife, the good and hard times.

Liog´s voice is poetically soft and profound. His vocal melodies dance in harmony with those from Mode, a young, talented Vancouverite singer who worked with Morin for this album.

“Tone-wise, where my voice is, is the perfect place for her voice to be. It was a comfortable match. The voice was essential to everything in the album,” said Morin.

Jean-Luc Charreton from France played guitars on the album, while French bassist living in Vancouver, Jean-Se Le Doujet, played in “Paradis.”  Le Doujet´s father played the accordion on several songs. Jim Warren, sound engineer for Radiohead and Arcade Fire, provided Morin with important feedback during the production phase. The album was mastered by Chris Potter, who has worked for Bryan Adams, The Cranberries, and Sarah McLachlan, among others.

Radio Canada invited Morin to release La rivière on February 14th. In just two days, he went from having 10 listeners on Spotify to 4,000. Today he has surpassed that number.

“I think it was because of the promotion I [received] from the radio in Montreal,” said Morin. “They are amazing. They put my album on the ICI Musique for one week for free and they made a fantastic review.”

Morin will begin touring soon. The first time he heard Robert Smith´s “Boys Don’t Cry,” he was nine years-old. Without understanding the lyrics, he fell in love with music. He believes in a common language without borders. 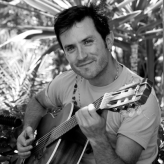