Put on your dancing shoes and bring a towel to the Grandview Legion (2205 Commercial Drive, upstairs) on Friday, Sept 14th because things are going to get sweaty with three amazing bands.  Doors at 8 pm, admission $10.  19+ only! 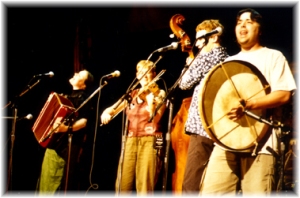 Flying Folk Army is folk music for people with short attention spans! From fast-paced celtic numbers to acoustic renditions of disco standards – the Flying Folk Army remakes many genres with their own rhythmic vitality. Part activist sideshow, part guerilla theatre and a large dose of whooping and hollering are the foundation of this group. It’s an 8-piece radical folk band and it’s always a party!

High Society is a four headed beast with the undying strength of animatronics driven by monstrous animal instincts; with the lungs only comparable to the likes of superman filling a voice that will pluck your heart strings. A Powerhouse 4 piece band, with variety in music like no other, they have been described as James Brown and Nina Simone on Crack! covering all the genres of soul, blues, R&B, hip hop, folk, jazz, alternative, and they even throw in a little bit of Bach! With lyrics that are either poetical and catchy or hilarious stories that keeps the crowd on the edge of their seat this band is not to be missed. 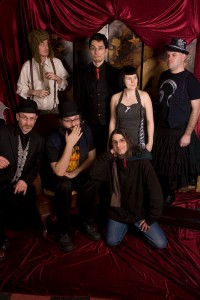 The Creaking Planks strap on forgotten and dismissed instruments of simpler times, preemptively gathering the tunes and jingles of today from the ashbins of tomorrow and re-presenting them in a novel anachronistic setting and style. Together, their sum suggests nothing stranger than the iPod of 1906.

A well-heeled crew of folk music misfits, we scour the wide world of music for songs we can bring close and make our own, regardless of source, genre or era. The Creaking Planks give obscure, hilarious songs by never-heard-of-thems like Bob Ukerand Al Mader the Minimalist Jug Band their proper due, performing them side by side with well-considered selections from the canonical songbooks of, for instance, Britney Spears, the Talking Heads, Nine Inch Nails and Sesame Street.

The Creaking Planks strive to achieve a species of cognitive dissonance through re-interpreting new music in old styles and on old-timey instruments (eg. accordion, ukulele, washtub bass, steel guitar) while peppering the stew with some traditional music from the ‘old country’ to keep you on your toes. Everything new is made old, and everything old is new again.